Beethoven vs. Chopin: The Lives of Two Legends 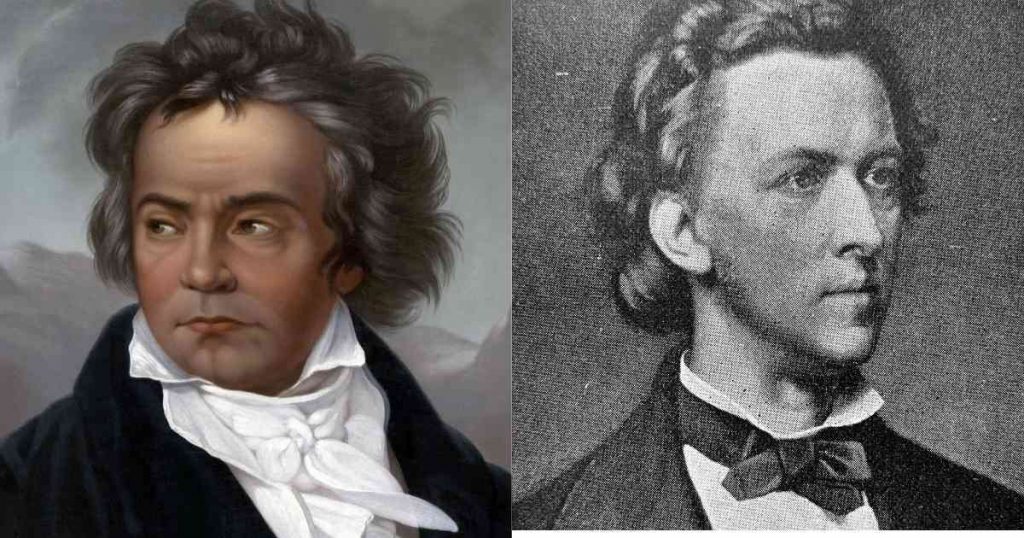 Ludwig van Beethoven and Frederic Chopin are two musical geniuses who have made significant contributions to music history. In this article, we’re going to compare these two men – Beethoven vs Chopin – and learn more about the similarities and differences between these famous composers.

Ludwig van Beethoven and Frederic Chopin are significant figures who have contributed to the development of classical piano music. Comparing these two great men is a huge task because they’ve accomplished so much.

We’re going to give an overview of the lives, works, and accomplishments of these men, and we’ll leave it to you to decide who your favorite is. At the end of this article, we’ll provide an analysis of their individual styles and sounds.

Beethoven vs. Chopin is a hot topic of debate amongst, but there is no perfect answer to who is better. It is best to appreciate the works of these two geniuses without bias. 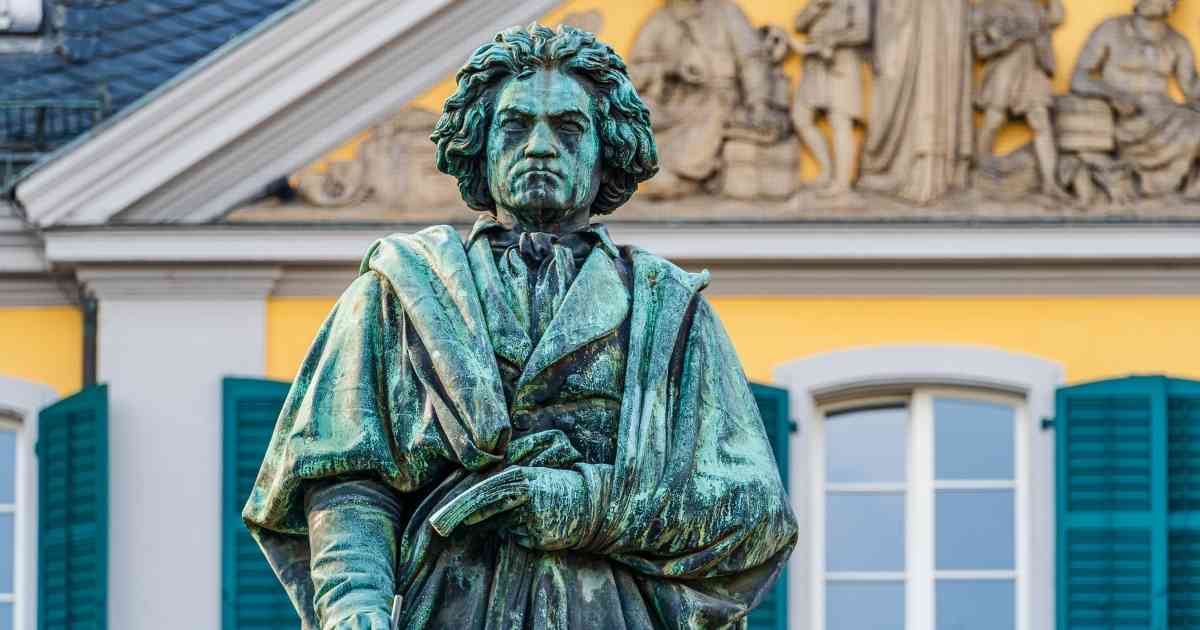 Ludwig van Beethoven was born and baptized on December 17, 1770 in Bonn, located at the banks of the Rhine in North Rhine-Westphalia.

It comes as no surprise that Beethoven became a musical genius because his history can be traced back to a long line of musicians. Beethoven carried the same name as his grandfather, Ludwig van Beethoven, who was a music director and singer.

Beethoven's first exposure to music was through his father, who taught Beethoven from a young age. Later down the line, Beethoven was taught by other teachers who shaped his musical talents. Some of these teachers were Gilles van den Eeden, Tobias Friedrich Pfeiffer, Franz Rovantini, and Franz Anton Ries.

These instructors gave Beethoven knowledge of different musical instruments, including the piano, violin, and viola. Beethoven started his music lessons at age five, and the training he received was intense. When he was seven years old, the young prodigy made his debut performance in March 1778.

Later in 1780, musical training became more serious for Beethoven, and he started classes with Christain Gottlob Neefe. Neefe played a vital role in Beethoven’s musical career, and he laid the foundation for him to become a composer.

After years of training under Neefe, Beethoven finally published his work in 1783, and it was a piano performance. Aside from being a student under Neefe, he also worked for him as an assistant organist in 1782 and was later promoted with pay in 1784.

At the age of 11, Beethoven was already gaining the public's attention, and he was described in the Magazin der Music as “a boy of 11 years and most promising talent. He plays the piano very skillfully and with power, reads at sight very well…. The chief piece he plays is Das wohltemperierte Klavier of Sebastian Bach, which Herr Neefe puts in his hands”.

This praise of Beethoven was a huge achievement, and it contributed to his public image. He was later appointed as the court organist in 1792 by Maximilian Franz.

Beethoven's musical career is commonly classified into three periods. These periods started when he left for Vienna in 1772, but he had already published some of his works while in Bonn.

Records show that he had written up to 40 compositions in Bonn. Although, there was a time gap between 1785 and 1790 when he didn’t release any new pieces.

During his time in Bonn, which characterized his early days as a musician, Beethoven was still discovering himself, and most of his works had a clear resemblance to some of Mozart's works.

The first period started in 1792. This began with Beethoven's journey outside Bonn and his arrival in Vienna.

After he arrived in Vienna, Beethoven became more well-versed in Haydn’s and Mozart’s styles of music and started making them his own. Beethoven’s pieces between 1795 and 1800 showed his uniqueness, and he wrote sonatas that were different from the usual form.

Beethoven’s music in this period was filled with complexities, and he used four movements in his sonatas instead of the usual three.

In this period, some of his renowned works include the first and second symphonies, the set of six string quartets, Op. 18, the first dozen piano sonatas, and the first two piano concertos.

The middle period is sometimes referred to as the heroic period. The middle period describes the time after Beethoven lost his hearing to tinnitus. Also, most of his works during that period were mainly centered around deeds of heroism and the struggles that came with it.

Some of his middle period works include six symphonies, the Triple Concerto and violin concerto, string quartets 7 to 11, Waldstein sonatas, Appassionata sonatas, Fidelio, and the Kreutzer violin sonata.

Although the works under this period are all classified as heroic, not all of his compositions were centered around the theme of heroism, like Symphony No. 6, Pastoral.

The late period falls between 1810 and 1819. At this point, Beethoven focused his interest on the works of some older legends like Johann Sebastian Bach, Palestrina, and George Frideric Handel.

His works in this period were characterized by polyphony and the Baroque style of music.

Beethoven wrote different genres of music, which we will classify. We’ll also mention the genres that are more widely known.

Under his orchestral music, Beethoven produced nine symphonies, one violin concerto, five piano concertos, one triple concerto for the piano and violin, and a cello concerto.

Under the chamber music genre, his works that are recognized to date include 16 string quartets, piano trios, sonatas for cello and violin, string trios, and pieces done with wind instruments. 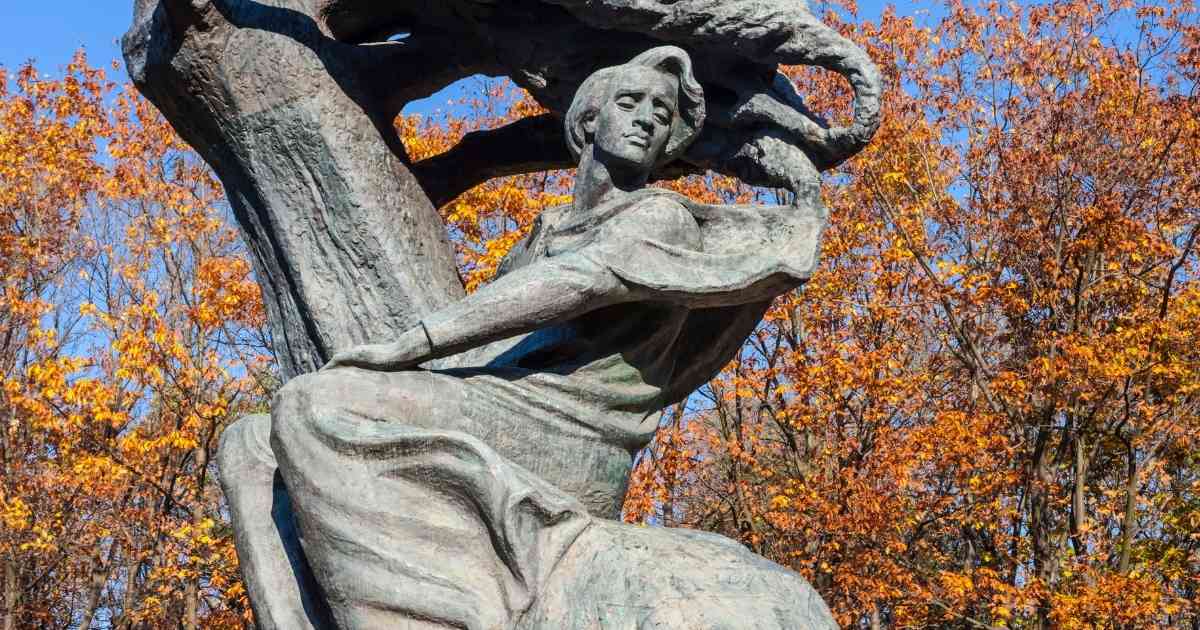 Frederic Francois Chopin was born on March 1, 1810 and died on October 17, 1849. Chopin was a renowned musical genius in his time, and although his life was short-lived, he still made his mark in Western classical music.

Chopin was born in Zelazowa Wola, Warsaw, Poland. Chopin’s parents were skilled in musical instruments: his father played both the violin and flute, and his mother was skilled with the piano.

With the joint effort of both parents, Frederic learned the flute, violin, and piano, but his latest achievements showed that he favored the piano more than the others.

While Chopin’s mother introduced him to the piano, it wasn’t until he was six that he received proper instruction from Wojciech Zywny. Zywny tutored Chopin from 1816 to 1821, and he attested that the young lad was a child prodigy.

Similar to Beethoven, Chopin also started performing publicly at seven. As of 1817, little Chopin had two polonaises in his name. The polonaises were in G minor and B-flat major.

Later in 1821, Chopin composed another polonaise in A-flat major in honor of his tutor, Zywny.

By 1823, Chopin was enrolled in Warsaw Lyceum, where he was taught to play the organ by Wilhem Wurfel until 1826. During the autumn of 1826, Chopin received further education under the instruction of Jozef Elsner, where he studied music theory, figured bass, and composition for three years.

Chopin was known for his solo piano work, but he had several other genres. Let’s take a look.

Beethoven and Chopin both showed great piano mastery and were labeled prodigies and geniuses from their childhoods. However, Beethoven is widely more recognized because he gave more public performances than Chopin.

Both men were unmatched in terms of skill and mastery, and it is difficult to say who was the better player.

Numerous musicians over the centuries have greatly influenced Western classical music. We are privileged to have access to records that contain the compositions of these legends, and we can still enjoy their music to date.

Beethoven vs Chopin is a hot topic of debate amongst classical music lovers, but there is no perfect answer to who is better. It is best to appreciate the works of these two geniuses without bias.