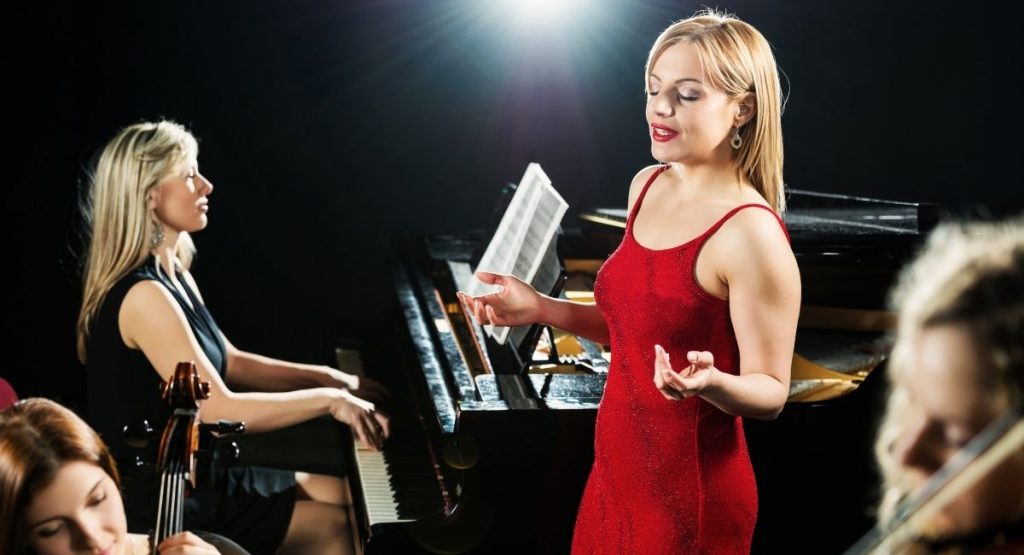 Being a soprano is not an easy job. You have to produce a classical singing voice of the highest vocal range. It can vary between 261 to 1046Hz! For that, a soprano has to practice for months or even years. However, once you master the skill, there is no limit to the fun.

The high, successive notes are what make sopranos the highlight in an orchestra. They're the ones who lead the show, this is especially true when sopranos sing the classical arias.

A classical aria, coupled with a powerful soprano voice, creates a stunning melody. Everyone will surely be head over heels after listening. So, if you’re an aspiring soprano looking for ways to amuse the audience, go ahead and practice some of those beautiful arias.

Don’t know which ones to choose? Well, in this guide, we have brought together everything you need to know about the best classic arias for sopranos. Read on for more!

There are numerous forms of music compositions used by artists. An aria is a classical type that works for solo voices only. However, people typically do not sing arias as a standalone performance.

Generally, it is a segment or small section in a larger musical work such as an opera. It may or may not feature instruments, though most aria singers prefer a full orchestra. The complete collection of instruments helps to create brilliant concert arias.

The Remarkable History of Arias

The classical arias hold a significant position in the music industry. These compositions first appeared in the fourteenth century. People considered it as a special singing style in medieval music.

By the sixteenth century, the industries had evolved greatly due to the Renaissance. That being said, the famous arias of the time found themselves connected to strophic poetry and madrigals. Later, in the seventeenth century, the music form became a huge success amongst Frenchmen.

Popular composers, like Jean-Baptiste Lully, led a trend to sing the best-loved arias in the Baroque operas. These early operas used dramatic melodies and text to express their stories. Thus, for a long time, there were intense and scary arias.

The eighteenth-century brought the most development and changes in arias. It was a classical period of legendary composers. Alessandro Scarlatti and Wolfgang Amadeus Mozart themselves created countless arias in different genres.

These composers used arias in cantatas, comic operas, dramatic operas, and much more. All these contributions gave rise to innovation and creativity amongst music composers. Hence, the arias became the most-preferred type.

The 19th and 20th century compositions were unique and widely-performed. Italian composers, like Gioachino Rossini and Giacomo Puccini, wrote some of the best pieces. Even today, people continue to increase the aria list by making valuable contributions!

Although a classical aria is simply a music form written to sing alone, many variations have sprung up over time. Also, each type has developed different idiomatic attributes. Let’s explore them briefly below!

It is the ternary ornamented form of the Baroque aria that uses the format A-B-A. The A section establishes the main theme, the B section brings up a new episode, and then the A section repeats. But, it's slightly different from the first one.

This particular type of aria is the one that talks about bravery and courage. Often, the heroic soprano sings it in a dramatic opera.

The Aria Buffa is the comedic one performed using a bass or baritone. As the name explains, it is a part of comic operas or opera buffa.

It is the speaking style or narrative aria that is much similar to the recitative vocal performances. These classical arias are also quite melodic.

The Cabaletta arias are complex and difficult with multiple sections. These are a popular choice in Italian operas that feature standalone beautiful opera songs.

The concert aria is the solo vocal concerto performed along with the orchestra. It serves as the showpiece or highlight for the virtuoso singer.

There are hundreds of classical arias available to perform in the music industry. From the early 1300s to the present, you will come across arias in all genres and types. So, which one should you choose to practice?

You should pick a charming aria by a popular composer. We recommend short and easier pieces for beginners and advanced sopranos alike. Once you’re familiar with the music form, you can opt for lengthier and more complex arias. Here are the best classical arias to try as a soprano!

The O Mio Babbino Caro is an exceptional aria that uses a lighter lyric voice. It revolves around a girl asking her father whether she can get married to a boy she loves. The aria continues depicting a sense of longing for love as the girl threatens suicide in exchange for a no.

It is a short piece that creates a beautiful, slow-paced melody. However, sopranos need to be vigilant as many take it too slow and, as a result, create a dragging feel.

The Un Bel Dì Vedremo is another amazing aria with a stunning melody but tragic lyrics. It talks about a young girl who awaits the arrival of her love named Captain Pinkerton. Although she remains optimistic for most of the aria, the realization soon hits her that Pinkerton has abandoned her.

The Vissi D’arte is a precise aria taken from the opera Tosca Act Two. In the aria, the main character ponders upon her fate and the life of Mario Cavaradossi (a beloved one). It also talks tragically about Mario's life that is at Baron Scarpia's mercy.

The protagonist continues the aria by questioning God and the apparent abandonment. It is a wonderful piece that has a lovely melody.

Another moving aria that sopranos must-try is the Marietta's Lied from Korngold. The lines are on the lengthier-side, but they spin around outstandingly. It results in a rhythmic and sweet sound that will leave all listeners mesmerized.

The Der Hölle Rache is one of Mozart's masterpieces. It features unique notes composed in D-minor. But, it requires a large orchestra with flutes, horns, trumpets, and several other instruments.

Mozart has depicted a vengeful scene in this famous aria. In it, the Queen of the Night tells her daughter to kill Sarastro or she will disown her. Hence, there is an intense and dramatic feel to the piece.

Arabella, also called Opera 79, is a comic opera written in three acts by Richard Strauss. The lyric comedy’s third act is an idealistic classical aria for sopranos. Its lines are short, simple, and light-hearted.

In this act, the prevailing confusion clears up between the characters. Mandryka comes to realize Arabella is innocent and the scene ends with them reuniting. Meanwhile, Matteo realizes it is Zdenka he loved all along and chooses her to be his partner. However, you may require a few more sopranos to complete the act's feel.

What Is the Most Beautiful Aria?

Perhaps it’s not wrong to claim that almost every classical aria is a beautiful one. The classical voice of female sopranos makes it a masterpiece. However, up until now, the most famous aria in terms of melody is the La donna è mobile from Verdi's Rigoletto. Although it is usually sung by male sopranos, female sopranos can also perform it.

What Is the Highest Soprano Aria?

The highest soprano aria is 'O mio babbino caro' from Puccini's 'Gianni Schicchi'. But, sopranos can produce higher voices (1046+ Hz) depending on the operatic experience. Thus, regardless of the famous aria, you can sing in higher notes than the recorded ones.

What Is the Most Famous Aria of All Time?

Who Has the Most Beautiful Soprano Voice?

Gundula Janowitz holds the title of having one of the most beautiful soprano voices. Her voice remains unmatched even until today. She has received multiple awards for her contributions. You can check out one of her amazing performances here.

Singing classical arias is undoubtedly the best part of being a soprano. The unique compositions and melodies allow the singer to explore a diversity of notes. They can also upgrade their voice type and skills.

Above, we discussed all the fundamentals of classical arias for soprano. We walked you through the history, types, and even the best ones to pick for your next performance. Hopefully, you now have no queries left unanswered!