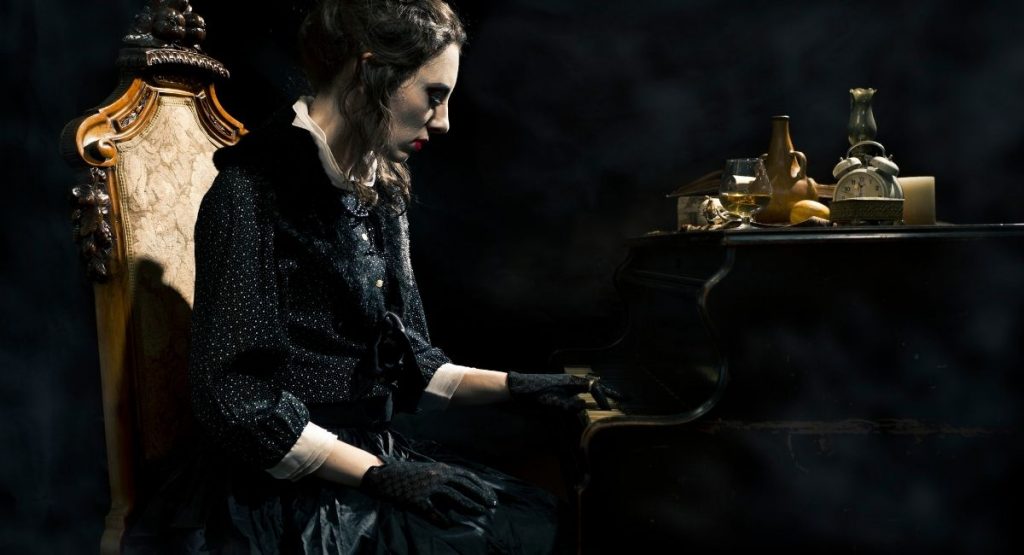 If you’re looking for hair-raising music to create the right atmosphere for your Halloween party, then your best bet is classical music. Contrary to the general opinion, classical music isn’t music that only serves for white-collar events.

If there’s one thing that classical musicians know how to do, it’s drawing out emotions from their listeners through melodic singing and well-placed orchestras and symphonies.

You can rest assured that the haunting notes of this list of gothic classical music will leave your family and guests with goosebumps!

The Gothic began to garner popularity after Horace Walpole’s The Castle of Otranto, which depicted terror, spookiness, death, and the dark side of human nature. It gained immense popularity in the Romantic period when composers became more fascinated by darker, ghastly, garish, and more supernatural content in their music.

It’s a bit unclear when exactly gothic classical music began, but Mozart’s Don Giovanni may very well have been one of the earliest examples of this genre. Regardless, one thing is clear, the influence of gothic classical pieces on Western music and art is irrefutable.

From Hector Berlioz’s Symphonie Fantastique to Richard Rodney Bernet’s The Mines of Sulphur, present-day composers and musicians have continued to explore the depths of the genre.

Without further ado, let’s get right into our gothic selection for classical music.

If you’re looking for witches’ laughter, ringing bells, and other bizarre sounds for your Halloween, this classical music checks all the boxes.

Symphonie Fantastique’s opening is one of the most iconic from music in this genre. Written and performed in the thick of the popularity of the gothic style, it’s a haunting rendition of an artist’s self-destructive behaviors towards beautiful women.

In this piece, Berlioz created a new score and pioneered the ‘idée-fixe’ style of music composition. As he tells the story of the artist, the ‘idée-fixe’ transforms each part of the music to reflect the feelings and scenes in the score.

In the fourth scene, the subject of the piece is convicted for the murder of his love and sentenced to death by the guillotine. It depicts his final moments as he marches to his death and his final thoughts are of the woman he murdered.

The next scene is the hellish Witches’ Sabbath, where you can hear the terrifying laughter of witches. Berlioz even manages to throw in the Dies Irae into the mix, elevating the sound with its haunting, chilling, and macabre storyline and musical composition, you’ll be sure to experience the season of Halloween to the fullest.

To date, several recordings have been made, including those by John Eliot Gardiner, Sir Colin Davis, Leonard Bernstein, and Naxos.

The French-Hungarian, Franz Liszt, was popular for his obsession with everything macabre and went as far as visiting prison dungeons to see people sentenced to death. He also didn’t shy away from exploring it in his work.

His brilliant compositions La lugubre gondola, Mephisto Waltz, and Pensées des morts all have elements of death and the after life. His most famous composition in this genre is Totentanz (Dance of the Dead).

The piece draws inspiration from Gregorian material and is immediately made obvious by its Medieval-sounding passages.

The opening is notable for its menacing and chilling discordant notes in the piano and orchestra, which ushers in a 15-minute long masterpiece of unearthly, hair-raising classical piano music - perfect for your Halloween party.

As the name suggests, the Danse Macabre is a gothic piece based on the French legend that Death comes out to play a fiddle every Halloween midnight, causing the skeletons in the grave to crawl out from the ground for a macabre dance party until dawn.

The piece opens with the violins calling out a warning that things are about to take a weird turn. Then the rest of the orchestra joins in a flurry of activity, adding a breathless sense of urgency to the theme.

While the violin solo represents Death himself and his expertise as a fiddler, the sounds from the xylophone mimic the rattling of bones to add a chilling and sinister undertone to the piece.

Although this piece of music is dark enough to give anybody the willies, it’s not damaging and safe enough for kids to listen to. In fact, there’s a PBS cartoon from the 80s to make the piece accessible to kids.

The storyline of Der Freischütz is based on Johann August Apel and Friedrich Laun’s 1811 collection, Gespensterbuch.

The opera is in three acts and follows an unfortunate rifleman (Max) who, after losing to a peasant in a shooting contest, must prove his marksmanship before the head forester would grant permission for him to marry his daughter, Agathe.

Weighed down by the possibility of losing his desired bride, his friend and colleague, Kaspar, plies him with lies and alcohol for courage. However, unknown to Max, Kaspar had already asked Agathe to be his bride, but she turned him down and he only desired revenge against them.

So, he persuades Max to have a midnight meeting in the Wolf Glen for some magic bullets that would help him win the competition. One of the bullets is the Devil’s bullet and he had cursed it to go wherever he desired (in this case, per Kaspar’s wishes, Agathe and her father). In a weird twist, the bullet fails to hit the target and instead kills Kaspar himself.

Gustav Kobbé describes the unearthly portrayal of the scene from the Wolf Glen as one of the most chilling, gruesome scores found in classical music.

The Wood Dove (also known as The Wild Dove) was composed based on one of the ballads written by the poet Karel Jaromir Erben. It tells a tragic story of a woman who poisons her husband and quickly remarries her young lover soon after.

Dvorák works magic that draws out an array of spooky emotions using the orchestra. The piece has four musical scenes that begin with a C minor funereal Andante, in remembrance of the dead husband.

After the opening is played twice, the drum and cymbal are introduced in true funeral march style and are characterized by Dvorák’s curse-motif. Then the piece switches again to a sickening festive tune (a Molto vivace) that depicts the happiness of the wedding.

Then there’s an unexpected turn for the dark. A wood dove sits on the branch of a large oak tree that’s grown over the deceased husband’s grave and calls out a reminder of the terrible thing she’s done.

As guilt swallows the woman, she takes her own life to find some relief from her burden. A violin solo portrays the relief her soul feels and the Dvorák’s curse-motif returns, followed by a funeral march for the dead woman.

This is where the opera deviates from the original ballad from Erben, as the woman was never forgiven for killing her husband. The piece ends with the same horn-octave (C-minor Andante) it opened with.

Anyone would find being dragged to hell a shocking and scary situation. Even more so, the fictional character Don Giovanni, who’s dragged to hell for being a rake by a statue that comes to life.

The piece is divided into two acts. The second act features several people warning Don Giovanni to change his ways or he’ll meet destruction, but he refuses.

The chilling moment in question comes in the second act, and the original piece ends in a comic finale. However, subsequent productions of the piece cut out the comical finale to give it a tragic ending.

One day, he stumbles across a statue that warns him of his demise if he doesn’t repent and he laughs it off, inviting the statue to dinner. The statue obliges and arrives at Don Giovanni’s home (with a foreshadowing overture set in dark D minor) to extend his own dinner invitation.

Upon accepting the invite with a handshake, Don Giovanni collapses in pain and terror as death looms and a chorus of demons surround him to carry him to hell, leaving everyone who witnessed the exchange in horror and palpable fear.

The right music sets the right tone for any kind of celebration, and Halloween isn’t exempt from it. If you’re tired of using the same old themes for your parties, you can switch things up this Halloween by incorporating the spooky sounds from our Gothic classical music list into your plans.

We hope that this selection helps ease you into the process. If you need more ideas for classical music for halloween, we have you covered!