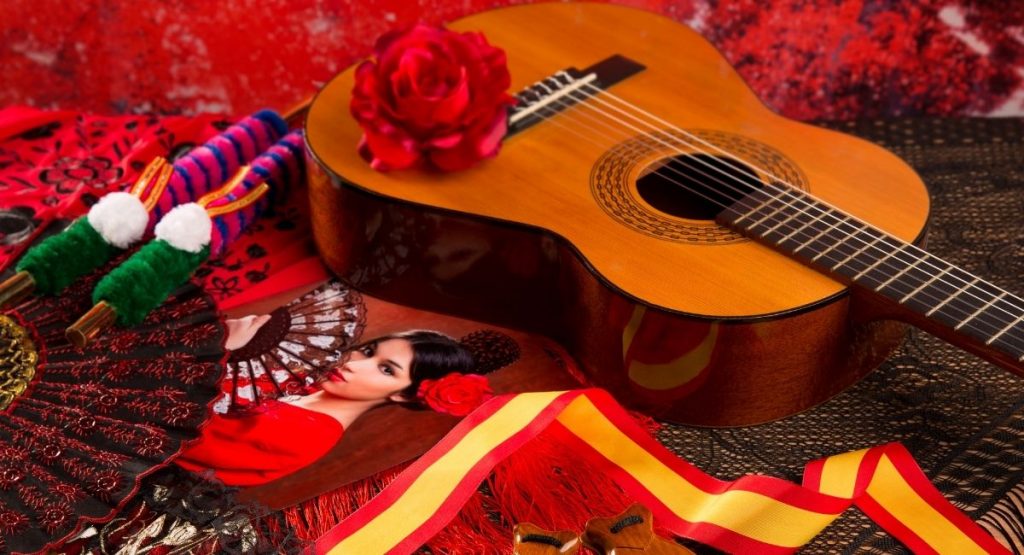 The guitar is a fretted and stringed instrument developed in the 13th century. Traditionally, it is mounted with six strings. The guitar’s sound is produced by strumming, causing the strings to vibrate and play chords. The guitar can be played either acoustically or with an amplifier.

There are some similarities in appearance between a classical guitar and Spanish guitar, otherwise known as a flamenco guitar. Their similarities may cause confusion, especially for people with little knowledge on the subject.

In this article, we will explore the differences between classical guitar vs Spanish guitar, which may be alternatingly referred to as the flamenco guitar.

The modern classical guitar is a term used to describe the six-course guitar. This instrument was developed in the 19th century by Spanish luthier Antonio de Torres Jurado.

The classical guitar is one of a few types of modern guitars. Others include the electric guitar, the steel-string acoustic guitar, and the Hawaiian guitar.

The modern classical guitar is used in classical music and other genres. It is a wooden instrument with strings composed of nylon or gut. The finger technique of this particular instrument involves single strings plucked with one’s fingernails, and less often with the use of one’s fingertips.

The Spanish/flamenco guitar is a type of classical Spanish guitar. At first glance, it looks very similar to the classical guitar, but there are a number of differences between them.

Flamenco music is synonymous with Spain and is culturally significant to the country. It was thought to have been developed in the 15th century by Antonio De Torres.

The guitar originated from Andalusia and was embraced by the whole of Spain. It was popularized by the 19th century classical guitarists Francisco Tárrega and Andrés Segovia.

Paco De Lucia was a Spanish composer and one of the first flamenco guitarists to dive into classical music using the instrument.

It is often performed solo with the guitarist tapping the rhythm on the face of the guitar. The playing of this instrument is often accompanied by the flamenco dance. It aims to cut through the sound of dancers stomping their feet.

The instrument itself is made of Spanish cypress and/or spruce, and is light in weight. A common technique of playing this guitar is called tirando, which consists of plucking or pulling the strings with index, middle, and ring fingers. The flamenco guitar has also been used to play genres other than flamenco.

Although these two guitars look similar, they are quite different from one another. The areas where these differences can be seen include:

Flamenco guitars are made from spruce, which accentuates its aggressive tone. Sycamore is sometimes used for other types of Spanish guitars, like the negra flamenco guitar. For this instrument, Spanish cypress is used for the sides and back to help increase its volume.

While the tops of classical guitars are often made from spruce and Indian rosewood, they sometimes possess cedar tops, with backs and sides composed of mahogany. Mahogany is a hard tonewood that sustains sound over distance.

The top of a flamenco guitar is thin to facilitate a vigorous playing style. On the instrument there is a plastic plate that protects the surface from damage. This plate is called a golpeador and contributes to the guitar’s alluring tone.

Flamenco guitars also have a flat neck relief, making them easier to play quickly. The instrument is under strict tension, which is why high tension strings are used. The strings lie close to the body to enable tapping with less pressure on the strings.

This is the easiest and fastest way to figure out the difference between classical and Spanish guitars.

The flamenco guitar is designed to cut through the sound of flamenco dancing, which produces noise from shoes striking the floor. Flamenco is high pitched, although the sound does not sustain. The sound decay is nearly instant, as opposed to classical guitars with a long and gradual decay.

4. Technique and Style of Play

Flamenco guitarists usually play between the soundhole and bridge, which produces a raspy sound. When the strings touch the fret, a percussive sound is produced.

The differences between a classical guitar vs Spanish guitar are not to be neglected. Although these guitars may appear similar, they are distinct in terms of the quality of the sound they produce.

Choosing the one to purchase will depend on the kind of music you wish to play. For example, classical guitar music should be played on a classical guitar and not a Spanish/flamenco guitar. Knowing the difference between the two is key, and will help you develop as a player.