All You Need To Know About The Classical Music of India 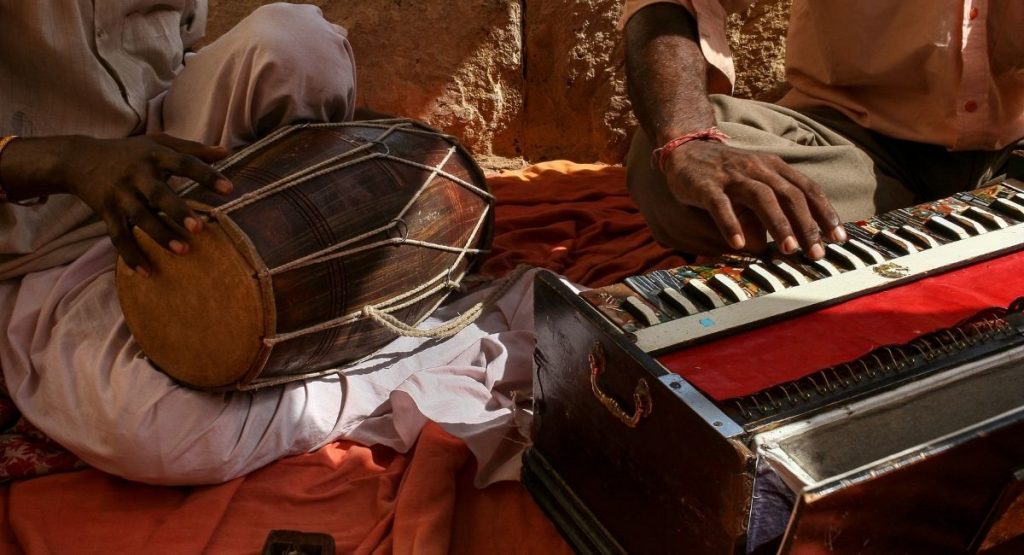 Classical music is generally associated with the West. But, did you know that India has its own classical music? Its origin can be traced back thousands of years ago and is deep-rooted in sacred texts. The classical music of India is one of the most elaborate musical genres in the world. This article will serve as an all you need to know guide that will aid your understanding of this classical form.

The Origin of Classical Music In India

Ancient Indians were moved by the spiritual essence of music, and Indian classical music was born from their appreciation of this quality. The composition of classical music in India necessitates an unwavering passion and a lifetime commitment for those who want to take it seriously.

Melody, rhythm, and harmony are the three main elements of most music. Traditionally, Indian classical music is a solo performance focused predominantly on melodic development, which contributes to its contemplative, spiritual aspect.

Rhythm is also vital in performance, providing texture, sensuality, and adding a sense of purpose to the song. Harmony in Indian classical music is mostly achieved through the tanpura playing the tonic (SA) and a fixed pattern of the fifth (PA) or fourth (MA) in the background, similar to an arpeggiated chord. Harmony in the Western sense is not present in traditional Indian music, and should not be expected.

Indian classical music has a rich cultural history that began in South Asia, but has since spread throughout the globe. Its history may be traced back to the Vedic writings from over 6,000 years ago, when chants were used as the foundation for rhythmic cycles and musical notes.

Indian classical music is inextricably linked to nature, drawing inspiration from natural events, seasons, and the movement of time in order to create musical moods called ragas, as well as a sequence of time cycles, otherwise known as taals, both of which are essential to this genre.

The majority of Indian classical music involves some improvisation, albeit expressed within a fixed structure of notes and a mathematically fixed compositional structure. This gives the music a sense of spontaneity, ensuring that each performer and performance is truly unique.

Indian classical music was never written down and was transmitted orally from guru to pupil. The pupil spends several years with their guru, forming a spiritual link and learning all aspects of the music, as well as philosophical and moral ideas that are meant to prepare the pupil for life. The color of a raga varies according to the guru or the group the guru belongs to.

Although Indian classical music can now be studied in a variety of institutions, and has been extensively documented and notated, it is still common practice for students to learn through observation, by listening, and by memorizing compositions. This traditional practice remains the most effective method of learning. Developing a connection with an expert teacher is considered the most beneficial way to learn.

The basic concepts in Indian music are:

Styles of Classical Music In India

There are two distinct styles belonging to the classical music of India:

The two styles began to diverge in the 12th and 13th centuries after the Mughal invasions of North India.

Northern music went on to adopt aspects of Arabian and Persian music, with Khyal and Dhurap as the main genres of the Hindustani style. There are also other genres in the Hindustani style divided into the classical and semi-classical genres. The major split between both styles of music came about in the 17th century.

Compared with the Northern style, the Southern musical tradition was not as influenced by the Arabian and Persian styles, containing few overlapping influences. The musical growth and changes of the Southern music group are most notable for their divergence from the Hindustani style.

An example of this is the new classification system of the raga called Asampurna Melakarta. This system was developed by Venkatamakhi, a 17th-century musicologist.

Both styles of music contain the same elements and would sound the same to untrained ears. Nonetheless, both styles are distinct in style, color, and approach.

In Hindustani music, concerts are performed by small groups of musicians that are composed of a singer, an instrumentalist, and a percussionist. The performance starts with an introduction called an alap, followed by a bandish or a jod, before culminating with a jhala.

In Carnatic music, the main emphasis is on the devotional and vocal aspects. The musical group has a singer, a melodic accompanist, a tanpura player, and a percussionist. The opening piece is a varnam that warms up into a krithi before ending in a pallavi or raga.

The Basic Concepts of Classical Music In India

Classical Indian music uses a Spartak system that consists of seven basic notes. They are distinguished as SA, RE, GA, MA, PA, DHA, and NI, and correspond to the western system of DO RE MI FA SO LA TI.

Five semitones are added to these notes to give the equivalent of a 12 note scale, which includes sharps and flats. When written down, they are indicated by underlining the note name.

Classical Indian music does not set the pitch of notes in fixed terms or frequency, as is commonly done in western music.

The classical music of India also makes use of ornamentations called alankar to punctuate musical scales. The glissandos and oscillations contribute to the overall beauty of a song. These punctuations are either determined by the writer or are based on a fixed set of rules depending on the raga.

There are 22 tones in a classical Indian music octave. The shruti, also known as microtones, are intervals of less than a semitone added to each note. The number of microtones set for each note is SA 4, RE 3, GA 2, MA 4, PA 4, DHA 3, and NI 2.

In the classical music of India, the word raga means passion, tint, or color. Raga can simply be defined as a specific combination of notes arranged into a particular theme to provide a basic and melodic framework.

Simply put, raga exists to invoke different emotional reactions at different periods of the day. That's why there are specific classical ragas for different day periods as well as events or seasons.

The Hindustani and Carnatic musical styles contain different styles of raga, which are easily distinguished. The Hindustani style has ten root ragas known as the thaat, while the Carnatic has as many as seventy two, which are called the melakarta.

Simply put, a tala is known as the rhythmic structure of a piece. Tala is also known as a cycle of beats. The first beat is the most important in a cycle and is called a sam. A percussionist starts and ends his improvisation patterns on the sam.

The Instruments Used in the Classical Music of Indian

Several different musical instruments have been developed and used in the creation of both Northern and Southern styles of Classical music in India. They include:

This is a plucked stringed instrument used in Hindustani (North Indian) classical music. The Mughals popularized the instrument, which gets its name from a Persian instrument called the setar (meaning three strings). Sympathetic strings, bridge design, a large hollow neck, and a gourd-shaped resonance chamber give it its characteristic tone and resonance.

The tabla is a membranophone percussion instrument composed of two drums. This instrument originated in the Indian subcontinent and is utilized in traditional, classical, popular, and folk music. Since the 18th century, it has been a major instrument in Hindustani classical music, and it is still used in India, Pakistan, Nepal, and Bangladesh. 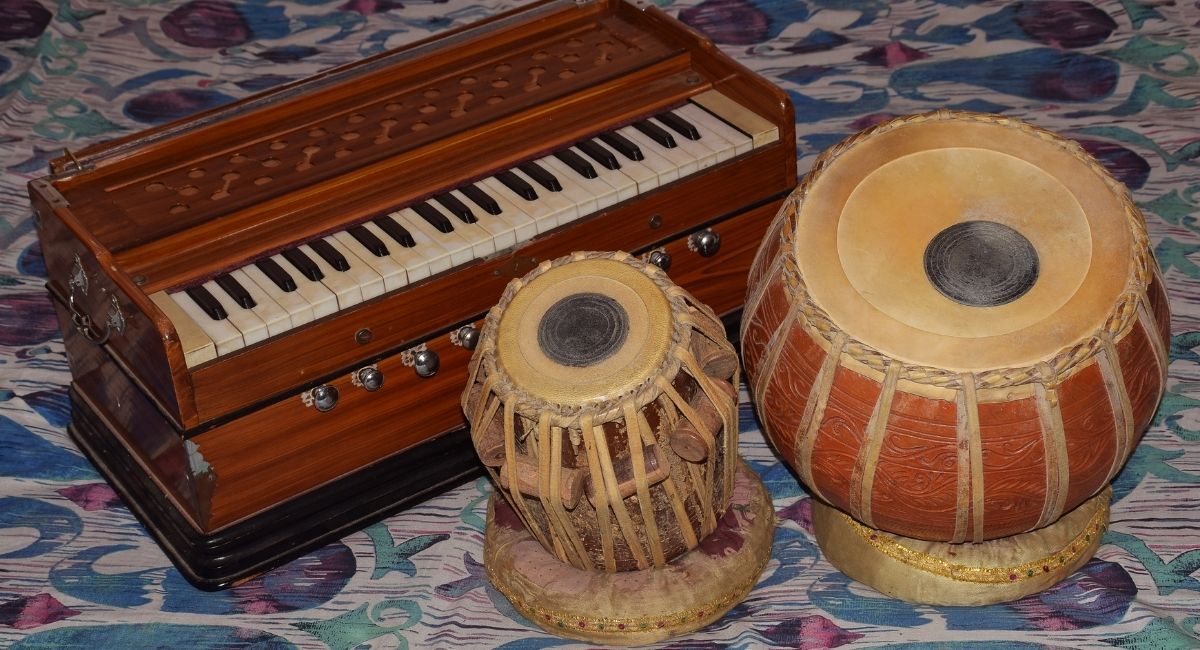 In terms of technique and expression, many instruments are designed to imitate the human voice. There is a long legacy of vocal music in both Hindustani and Carnatic music that ranges from complex elaborations of ragas to lighter songs and romantic or spiritual poetry.

The veena is a chordophone instrument that originated in the Indian subcontinent. Lutes, zithers, and arching harps are examples of ancient musical instruments that have evolved into various forms and are similar to the veena. The rudra veena, the saraswati veena, the vichitra veena, and other regional designs are variously named.

The Mridangam is a traditional Indian percussion instrument. It is the main rhythmic accompaniment in a Carnatic music piece, and it is called Pakhawaj in Dhrupad.

The classical music of India is deeply enjoyed by many different individuals. This is in part due to its engaging, tranquil, and uplifting qualities. Generally, it has a euphoric and calming effect on the listener. It is tough to master, but it brings a great deal of satisfaction. Like Western Classical music, Indian classical music has its roots in spiritual experience, and the spiritual nature of the melodies transcends their compositional form.