Liszt And Chopin: Their Life And Relationship 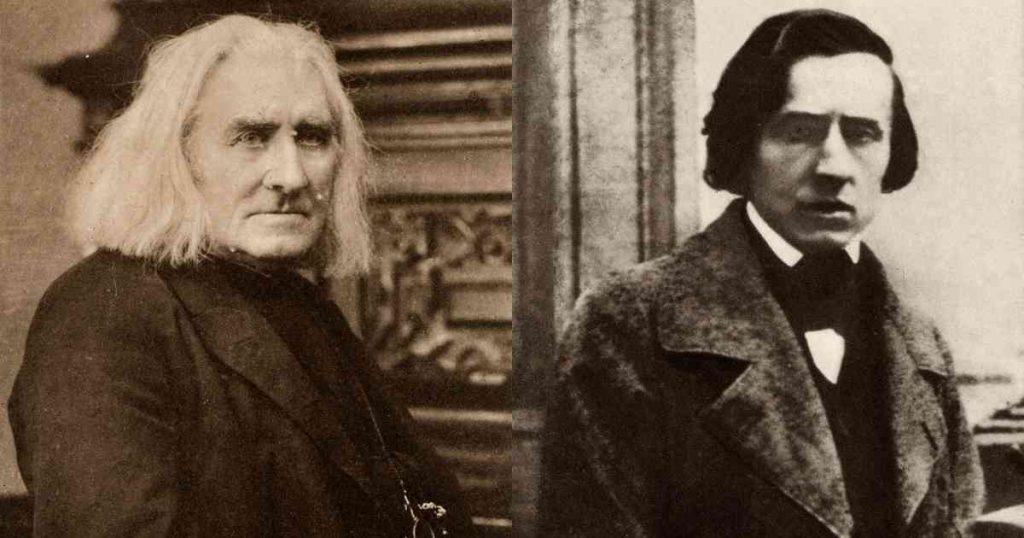 The Romantic era brought about the evolution of classical music, marking a turning point in western culture. The era produced some of the most exceptional composers, and we still appreciate many of their works to date.

Franz Liszt and Frederic Chopin were Stella composers that shook the foundation of western classical music during the Romantic era. These composers were both talented pianists who composed several pieces during their lifetime.

There is a lot to know about the lives of these legends, including the relationship between them. This post will teach you about Liszt and Chopin's life, including their relationship. Sit tight and enjoy some classical insight. 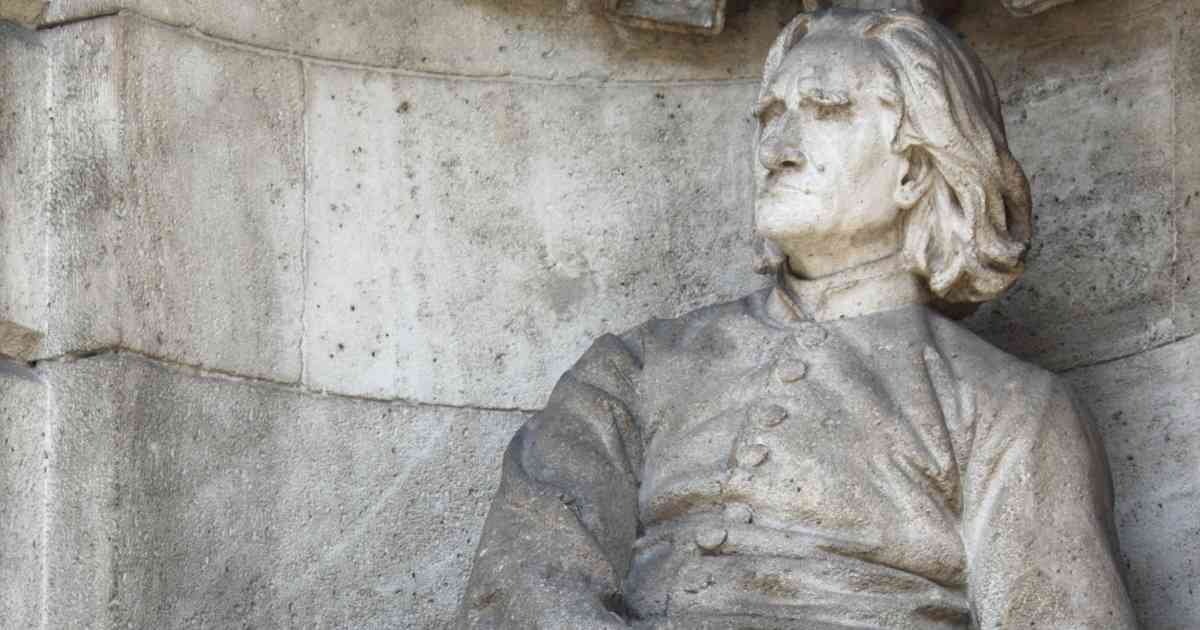 Franz Liszt was a composer in the Romantic era. He was born in October 1811 and died in July 1886 at the age of 74. He composed several pieces that have been preserved and made acquaintances with some exceptional composers.

Franz was born in a small village called Doborjan, located in Sopron County, Hungary. Like most composers in the Romantic era, Franz learned to play instruments from his father. Adam Liszt, Franz's father, was a musical genius who was proficient in the violin, guitar, and cello.

From age six, Franz already showed vivid interest in what would become his niche instrument, the piano. Seeing Franz's deep interest in the piano, his father started teaching him when he was seven. Franz took his father's teachings to heart and also gained experience from the music played during mass.

At the age of eight, Franz was already composing music. He made a name for himself at the age of nine after performing in concerts at Pressburg and Sopron. Franz's brilliant performance in these concerts caught the attention of some wealthy benefactors, and they decided to send him to music school in Vienna.

Thanks to this opportunity in Vienna, Franz could learn from some of the best tutors in that era. He learned from Carl Czerny, who the great Beethoven and Hummel once tutored. He also got some composition classes from Antonio Saleri and Ferdinando Paer.

Franz held his first public concert in 1822 at age eleven, spreading his name and reputation even further. After this performance, he became exposed to the affluent class and met Beethoven and other famous composers.

Later in 1824, Franz published his first composition titled “Variation on a waltz by Diabelli.” His first publication is called S.147 today.

Franz is remembered today as a virtuoso pianist, with several compositions to his credit. Some of his popular works include the 19 Hungarian Rhapsodies, Harmonies poetiques et religieuses, and the Piano Sonata in B minor.

He also made transcribed compositions of some famous composers like Beethoven and Berlioz. In addition to Franz's piano work and transcriptions, he also composed some organ music. Franz's period of organ music was between 1850 and 1855.

During this time, he lived in Weimar, the home of J.S. Bach, an organ music legend. It is believed that Franz's environment influenced his music, and he released two organ music pieces. These pieces were regarded as his greatest organ music accomplishment.

Franz was also known for his literary work, and he wrote several books and essays in his time. One of these books was about Frederic Chopin, and it was titled “Life of Chopin.” This book is one of the reasons people wonder about the relationship between Liszt and Chopin.

After a life of several piano compositions, transcriptions, and literary works, Franz died in January 1886. His health took a noticeable downhill after he fell from the stairs of his hotel in 1881.

He showed signs of heart congestion, and several illnesses followed. He died in 1886, and the official cause of death was pneumonia.

Frederic Chopin is another legend that the Romantic legend has to offer. He was also a Virtuoso pianist like Franz Liszt, and we’ve seen that they both knew of one another. It is speculated that Franz looked up to Chopin in some capacity, and this theory is backed by the fact that Franz wrote a book dedicated to the life of Chopin.

Frederic Chopin, or Fryderyk Chopin, was born in Zelazowa Wola, a small village in east-central Poland. He was born in 1810, but different records tell different months regarding his birth. The commonly accepted birth month is March 1810.

Chopin's father, Nicolas Chopin, was born a Frenchman, but he moved to Poland in 1787. He later married the relative of one of his bosses, Justyna Krzyanowska. The couple gave birth to a boy in 1810 and named him after his godfather, Fryderyk Skarbek, a student under Nicolas.

Chopin was the only male child in the family with three sisters. Not long after Chopin was born, the family relocated to Warsaw. Chopin’s father worked at a secondary school in the area as a French teacher, given his French upbringing.

Aside from Nicolas's French proficiency, he was also skilled with the flute and violin. On the other hand, his wife was skilled with the piano and tutored the boys in the boarding home. We believe Chopin got his interest in the piano from his mother.

At age six, Chopin started piano lessons with Wojciech Zywny. Due to Chopin’s high affinity and musical intellect, he was already making public performances at the age of seven. It didn’t take long for Chopin's talent to shine through, and he was already recognized as a genius from an early age.

Aside from his public performances, Chopin also composed some works at the age of seven. He made the two Polish dances or polonaises in G minor and B-flat Major. He later composed another piece in honor of Zywny in 1821 – this piece was also a polonaise in A-flat Major.

After his education with Zywyn, Chopin enrolled in his father's school, Warsaw Lyceum, between 1823 and 1826. He expanded his knowledge of instruments and learned how to play the organ. Wilhelm Wurfel, a Czech musician, served as his organ tutor in Chopin’s first year at the school.

Chopin moved on to learn the theory of music, figured bass, and composition. He was tutored in these topics by Jozef Elsner, a Silesian composer. During his time in the school, Chopin worked on several compositions and gave several performances in school and outside school.

Chopin also developed an interest in the aeolomelodicon, an obsolete instrument that combined the piano and mechanical organ. In 1825, Chopin performed his work and part of Moschele's work on the aeolomelodicon. His performance was so outstanding that he was requested to play for the King, Tsar Alexander 1. The king was so impressed by his performance that he gifted him a diamond ring.

A few months after Chopin’s performance for the king, he performed the Rondo Op. 1. This piece was his first published work, and his genius was recognized by the press. In the following years, Chopin moved around and was exposed to different Polish cultures.

Chopin stayed in Warsaw until 1830. He held a concert to mark his farewell; he performed one of his compositions with singer Gladkowska. There was a rumor of a romantic inclination between Chopin and Gladkowska, but there was no further interaction between them after Chopin left.

Along the line, Chopin met other composers and pianists with whom he shared a common passion. Among these pianists was Franz Liszt, and they both performed a concert together in 1833 with Hiller. This performance was a concerto by J.S. Bach and played on three keyboards.

From Liszt's record, we can stipulate that Chopin and Liszt came in contact with one another between 1820 to 1830. However, we know that they both met after Chopin came to Paris.

Chopin sent a letter to his friend Woyciechowski in December 1831, and he mentioned some composers he met, including Liszt. Chopin said in the letter, “I have met Rossini, Cherubini, Baillot, and Kalkbrenner. You would not believe how curious I was about Herz, Liszt, Hiller, etc.”

After he arrived in Paris in late December 1831, Chopin made his Parisian debut in February 1832 at the Salle Pleyel. We know Liszt was in attendance because he made a statement regarding Chopin’s performance, where he said, “The most vigorous applause seemed not to suffice to our enthusiasm in the presence of this talented musician, who revealed a new phase of poetic sentiment combined with such happy innovation in the form of his art.”

Chopin’s performance left a deep impression on Liszt, and they both became friends afterward. Records show that Liszt and Chopin lived near each other for years. Liszt stayed at the Hotel de France while Chopin was lodged in Rue de la Chaussee-d Antin.

Apart from the close living arrangement, Chopin and Liszt performed together on different occasions. They both performed George Onslow's Sonata in F minor at a concert hosted by Hector Berlioz. After this, they had some joint appearances before their final collaboration in April 1841.

However, their relationship was not perfect, and there were traces of malice. We can see this example when Chopin scolded Liszt for misplaying one of his pieces in 1843. Chopin remarked that Liszt should play the music how he wrote it, or he shouldn’t play it at all. Liszt apologized for this incident, but their relationship became strained afterward.

Liszt and Chopin are two legendary composers that dominated the Romantic era. The history of western classical music would be incomplete without these two men – they were proficient pianists that composed several pieces that are used to date.

We’ve examined the lives of these great men and their relationship with each other. We can see that they were good friends but also had elements of enmity.